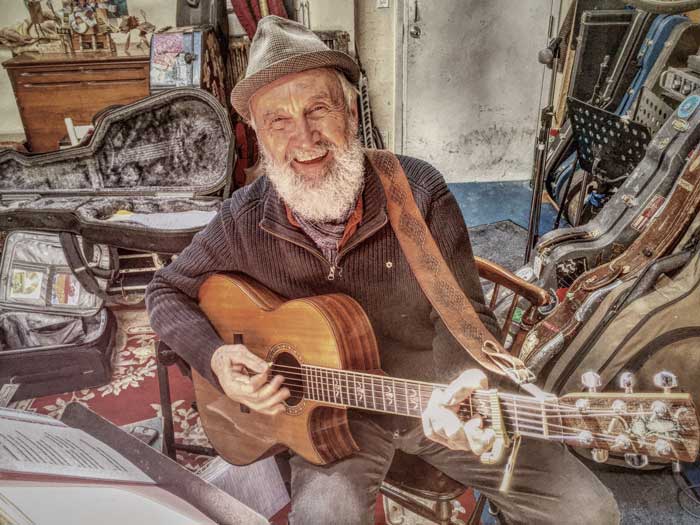 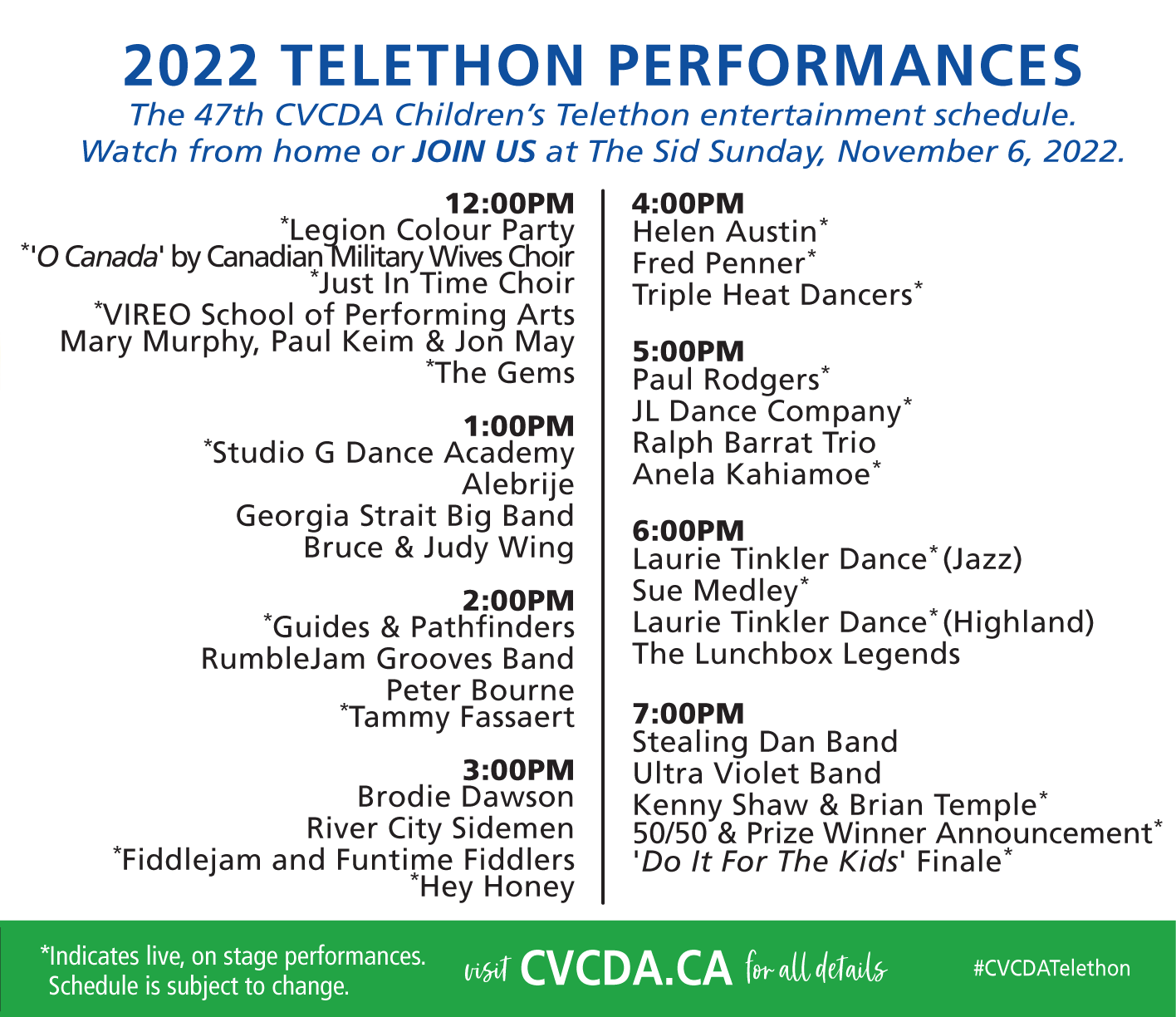 One of the best parts about telethon each year is the eight hour long program of live entertainment. There are many singers, song writers and instrumentalists. Some performing solo or as duos, trios, and choirs, big bands and even dancers.

What makes telethon really special though is all of the entertainment, special guests and MCs are all local to the Comox Valley and surrounding area. The Telethon committee prides itself on this fact.

“When people ask me what big names we bring in for our telethon, I have to stop them. “Bring in!?”, I exclaim. I share with them that we do not ‘bring in’ anybody” says Pam Crowe, Chair of the Telethon Committee. “We never have to go outside of the Comox Valley with so much great talent right here”

This year is no exception, year over year Telethon welcomes back a number of regular performances along with new and up-and-comers who donate their time to join us on the stage of the Sid Williams Theatre. All of this is to entertain and celebrate this great community and the supporters of the Comox Valley Child Development Association (CVCDA).

For 2022, the CVCDA is pleased to announce that Fred Penner will be joining the ranks of the 47th CVCDA Children’s Telethon performer list. This two-time Juno winner, is an acclaimed family entertainer, singer/songwriter, composer, actor, writer, author, TV host and keynote speaker. At a recent keynote address to an early childhood education conference, Fred Penner delivered a simple, yet powerful message. “Never underestimate your ability to make a difference in the life of a child.”

Telethon organizers are over the moon for this support from a prominent performer with a heartfelt message in alignment with CVCDA’s mission and vision. “We are so thrilled for many of our kids to be able to come out for free and see such a wonderful live performer among many. We know many of the parents will be just as excited, if not more” said Brooklyn Galloway, Communications Lead for the CVCDA.

Along with Fred Penner will be a whole roster of family friendly entertainment. For a number of years, JUNO Award winner, singer-songwriter, Helen Austin has participated as both an MC and a performer. Also, BC Country Music Association’s “Entertainer of the Year Award” for four consecutive years and now BCCMA Hall of Famer, Kenny Shaw will be back doing double duty as performer and MC bringing his humour and high-energy antics to the stage. Other MCs we are welcoming back for their second year are Sue Wood and Brian Wise.

There will be over 30 performances in all also including the Georgia Straight Big Band, Just In Time Choir, musical duo, Hey Honey, Peter Bourne, Tammy Fassaert and so many more. The telethon also hosts the Valley’s many dance studios including VIREO School of Performing Arts, Studio G Dance Academy, Laurie Tinkler School Of Dance, Triple Heat, and JT Dance as they perform numerous numbers in a range of disciplines.

Not only have they participated behind the scenes, wearing many hats through planning, promoting, fundraising and running the back stage, but have all at one point performed as musicians throughout the years, either solo or with various bands.

Kenny Shaw remembers playing with the band Still Water at the very first Telethon and played many of the years to date either solo or with a band, even performed as a comedian.

Originally many of the acts were pre-recorded similar to when we went all virtual during the pandemic in 2020. “Back then we didn’t have the hall yet for our performers to play in and the recordings took place at the C-CTV studio (before SHAW TV)” remembered Fuzz. “There was only one mic hanging down from the ceiling with plastic on the walls and insulation underneath”. The event has come a long way from then now with a spacious theatre for public to come down and watch the show in person.

The 2022 CVCDA Children’s Telethon will broadcast live from the Sid Williams Theatre via their Broadcast Partner, Shaw Spotlight on Sunday, November 6th, 2022 from 12 noon to 8 pm.  Spectators from the public are welcome to the theatre throughout the event at no cost. And of course, families will still have the opportunity to view from the comforts of their own home or where ever they are in real-time from their TVs or streaming devices.

The Comox Valley Child Development Association is a non-profit organization locally supporting children, youth and adults with diverse abilities and their families since 1974. Their programs are diverse and broad-reaching in the community, helping more than a thousand children and their families each year. All of the CVCDA’s 17 programs are designed to not only enrich the lives of the people who access these services but also to contribute to a stronger Comox Valley that welcomes and includes everyone who lives here. Families who use services through the CVCDA.